Progressive Club warns of decline in Serbs’ rights in region 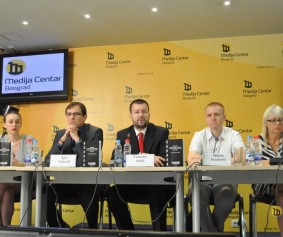 In previous six years, a decline in the political rights of the Serb people in the region has been noted, and this trend has been particularly marked in the last two years.“This is a consequence of the economic crisis, but also the political circumstances in Serbia and problems facing the Serbian society,” President of the Progressive Club Cedomir Antic said when presenting the report.Serbia is neglecting Serbs in the region, Antic said, and noted to illustrate his point that this is the first time since 1991 that Belgrade does not have a ministry, office or agency dealing with the position of Serbs outside Serbia.The Progressive Club examined the position of Serbs in Bosnia-Herzegovina (BiH), Montenegro and Croatia, and analyzed for the first time the rights of Serbs in Kosovo-Metohija (KiM), the southern province of Serbia, as stipulated in UN SC Resolution 1244.There has been no decline in the rights of Serbs in BiH last year, but their exercise has been at risk, Antic said.He noted that protests in BiH were officially explained by the difficult economic position that citizens are in, but they in fact had underlying political objectives, while those who led them ”wanted to establish a unitary state with the Great Bosniak hegemony”.These protests were planned in certain circles in the EU and USA, but they were refused in Republika Srpska, where people have a low living standard, as well as in other parts of BiH, but are satisfied with the fact that they have their own state, Antic said.In the previous year, Serbia did not implement either the agreement on special ties in an adequate way or the systemic policy for protection of the Serb entity in BiH, the president of the Progressive Club notes.The leftist government in Croatia did not meet Serbia’s expectations, as “the division in the Croatian society finds a subtle method of reconciliation in the joint negative stance toward the Serb people,” he noted.The “Ku Klux Klan” approach to Serbs’ right to use the Cyrillic script is in force in Croatia, Antic said, cautioning that Serbia must not show the understanding for the chauvinism that has been encouraged in Croatia in the last 20 years.When it comes to the position of Serbs in KiM, Antic noted that the Brussels agreement gave Serbs certain rights without a change in the Kosovo constitution, but that the fact that the only guarantee for implementation of the rights is the EU’s will gives a cause for concern given that a change in the Brussels administration can lead to a different interpretation of these rights, he noted.“We do not believe that in such circumstances the respect of Serbs’ rights in KiM could be improved in the foreseeable future,” Antic said.Igor Vukovic, a member of the Progressive Club, spoke about the political deprivation of Serbs in Montenegro, pointing to the irregularities in the last presidential and local elections, and underscored that Serbs were the biggest victims as their representatives are in the opposition in Podgorica.Vukovic also noted the problems related to the financing of the Serb National Council in Montenegro, and a discriminatory bill on national symbols which prohibits the use of non-Montenegrin symbols on many occasions.The report also warns that Albania is carrying out a continued policy aimed at the assimilation and infringement of Serbs’ rights. In Hungary, although the government led by Viktor Orban was not conducive to rights of national minorities, it is the first time that Serbs have their representative in the parliament in the capacity of spokesperson without the right to vote.In Slovenia, Serbs still do not have the status of a national minority, but the country started resolving the issue of those who were erased from the register.Romania is the only state in the region in which members of minorities have all the rights guaranteed by the Constitution, but Serbs in that country are facing the assimilation and their number is on the decline, reads the report by the Progressive Club, a non-governmental organization dealing with the problems and rights of Serbs in the region.